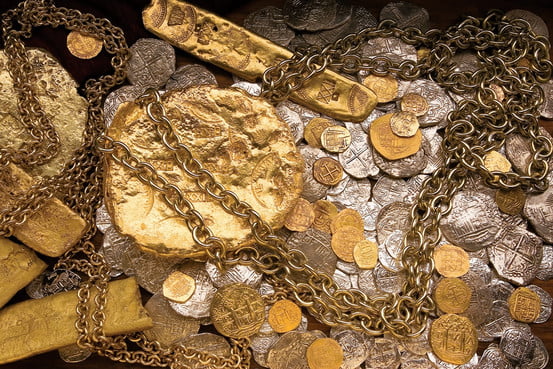 The waters of the Florida Straits, the Gulf of Mexico, and the Gulf Stream-washed Atlantic seaboard of Florida are exceptionally rich in terms of maritime history. From the earliest Spanish and Portuguese explorers, through the golden sagas of over 200 years of Spanish treasure convoys, to the days of the slave trade and the pirates of the Caribbean, the blue waters around the Keys have played host to an incredible density of action, adventure, and pure human drama. If you are looking for a real idea of the historical (and material) riches associated with the region, or if you simply like amazing stories of the search for and discovery of sunken treasure, you will want to visit the Mel Fisher Maritime Museum.

Located off the corner of Sunset Lane and Whitehead Street at 200 Greene Street in Key West, the museum is at once a treasure house and a tribute to Mel Fisher, the legendary treasure hunter who discovered the Spanish treasure galleon Nuestra Señora de Atocha, the richest shipwreck ever found, and many other golden prizes. Fisher was possessed of a true depth of skill and experience: carpenter, musician, engineer, WWII veteran, inventor, pioneering SCUBA diver and dive shop entrepreneur, and recreational diver and treasure hunter.

Mel took his new wife Dolores wreck diving in the Florida Keys during their 1953 honeymoon, and the couple went on to open the world’s first dive shop in Redondo Beach, California. Financed by commercial diving for spiny lobster in the cold Pacific waters off California, the Fishers and their shop played a major role in establishing the sport of recreational diving. More than 65,000 new divers were trained through the shop, and Mel was also a pioneer in underwater films and movies. He even had his own weekly dive adventure shows in the early days of television.

Mel and Dolores and their dive buddies were soon exploring shipwrecks off the California coast and going on Caribbean treasure hunting dive trips. When Mel met Florida treasure hunter Kip Wagner in 1962, he decided to join Wagner in the search for the famous wrecks of the 1715 Spanish Plate Fleet that was destroyed in a hurricane off the southeast Florida coastline. Mel moved to Florida along with a hand-picked crew of seven divers and began the search. 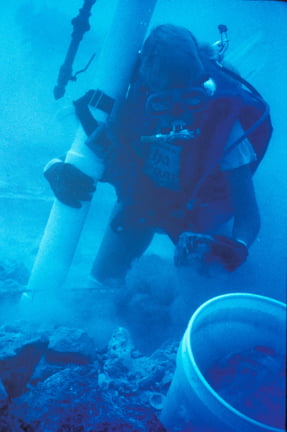 After spending 360 days with no results, the team was using an invention of Mel’s that was intended to channel the prop wash from a boat downward, bringing with it clear water so divers on the bottom could see. However, the pressure of the water flowing from the tube-like device also had the effect of clearing sand away and digging into the bottom. When Fisher’s team saw 1,033 gold coins at the bottom of the hole, the treasure hunt was on, and the team spent 10 more years salvaging the 1715 Fleet, discovering 2 ships and millions of dollars worth of treasure.

Because the Atlantic coast of Florida is impossible to dive in the rough-water months of winter, the Florida Keys are an off-season alternative treasure hunting site. In about 1969, Mel began to work on the search for the Nuestra Senora de Atocha, a heavily-laden treasure galleon that was sunk along with several other ships by a strong hurricane in July, 1622. Years of effort followed. They included personal tragedy when Mel’s oldest son Dirk, his wife Angel, and diver Rick Gage died on July 13, 1975 when their boat capsized during treasure hunting operations. The Fisher team’s efforts were finally rewarded in 1980 when they located the Atocha’s sister ship, the Santa Margarita. The Margarita yielded a treasure of more than 20 million dollars worth of gold and priceless artifacts. Wanting to conserve the finds and share them with the public, and in need of a research center and headquarters, Mel used part of his share of the treasure to buy a former Key West Naval Station building that became the permanent home of the non-profit Mel Fisher Maritime Heritage Society Museum.

Convinced that he was closing in on the trail of the Atocha, Fisher pushed on, driven by the motto “Today’s the Day.” Perseverance paid off on July 20, 1985. After more than 15 years, Mel’s dream was achieved, and the Atocha’s mother lode was located. The richest treasure trove to come to light since the 1930’s exploration of King Tut’s tomb included gold, jewels, silver bars and coins, jewelry, gold chains, gold disks, and thousands of other artifacts. The Fisher family and their treasure hunting team became world famous with numerous television shows, National Geographic articles, and countless other reports and stories documenting their contribution to history. Even today, the Margarita and the Atocha sites give up more treasures and artifacts as modern treasure hunters apply new technologies to the search.

A visit to the Mel Fisher Maritime Museum offers a chance to learn about the work of underwater archaeologists, as well as the 1622 treasure fleet; the Henrietta Marie, an English merchant-slaver found by Mel’s divers in 1972; the African Cemetery at Higgs Beach; and the Key West Turtle Cannery museum located at 200 Margaret Street on the Key West bight. Don’t miss your chance to join the thousands of scholars, students, and lovers of seafaring, treasure-hunting adventure who come from around the world to experience the amazing cultural and historical treasures that have been recovered by Mel Fisher and his golden crews.