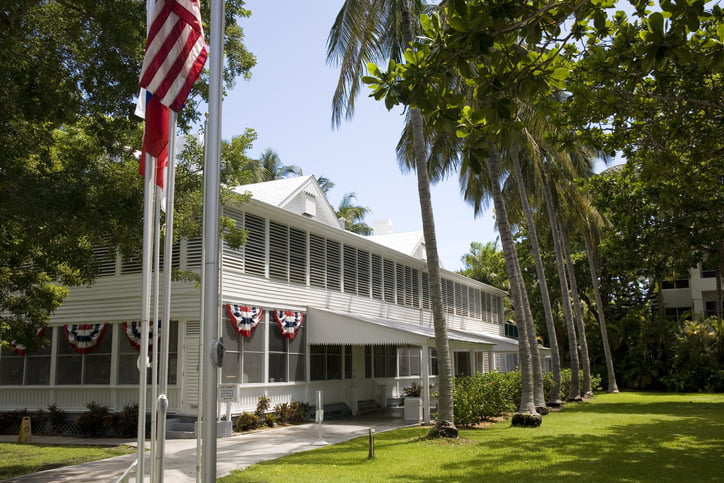 The far west end of Key West beyond Whitehead Street holds several easily accessible points of interest that are well worth exploring. Fort Zachary Taylor and the local favorite Fort Zach Beach are both wonderful places to spend a day. Maritime history buffs will surely want to take in the Key West cruise ship docks along the US Navy mole, established during the days when Key West was the home of Naval Station Key West. Nearby, the US Coast Guard Cutter Ingham Maritime Museum features one of only two preserved Treasury-class United States Coast Guard Cutters and the most decorated vessel in the Coast Guard fleet. And of course the Mel Fisher Maritime Heritage Museum will have to be placed on the to-do list as well.

Another slice of history on the west side of the island is the Harry S. Truman Little White House at 111 Front Street. This historic residence, originally constructed as quarters for the commandant of the Key West Naval Base, served as President Truman’s home and headquarters during eleven visits to Key West between November, 1946 and March, 1952. Truman’s first Key West visit was prompted by orders from presidential doctor Wallace Graham as a relief for the physical exhaustion the President was suffering from after spending his first 19 months in office during the close of World War Two. Truman arrived in Key West on November 17, 1946 and spent a week in the house, which had previously been used by another president, William Howard Taft, on a stop over en route to inspecting construction on the Panama Canal in 1912. Later, during World War 1, inventor Thomas Edison lived in the house for six months while working on new weapons for the war effort.

Logs were kept of each presidential visit to Key West.

During later visits, President Truman conducted many affairs of state and performed many presidential duties while staying at what became his winter White House. Technological advances soon made it possible for the President to easily communicate with world and political leaders from Key West, or summon staff down from Washington in only 3 hours by air. Truman recognized that wherever the President was, the White House was, and presidential documents bore the letterhead of The White House, US Naval Station, Key West, Florida. Truman also frequently hosted cabinet members and foreign officials for fishing trips and poker games. By the end of his two terms in office, Truman had spent 175 days of his presidency in the house.

The Little White House continued to be used by later presidents including Dwight D. Eisenhower, John F. Kennedy, Jimmy Carter, and Bill Clinton. It also still served as the Naval Station commandant’s quarters until the submarine base closed in March of 1974 when the Navy made the transition from diesel to nuclear submarines. Added to the National Register of Historic Places on February 12, 1974 and now owned by the State of Florida, the Little White House is still used by the US Departments of Defense and State for dinners and diplomatic missions.

Open to the public as a small historical museum, the Little White House is Florida’s only presidential site. In 2009, the house underwent a $1 million dollar restoration in celebration of Truman’s 125th birthday. It appears much the way it did during the Truman years, with many of the original furnishings from a 1949 remodel and much Truman-era presidential memorabilia. A tour of the Little White House will provide interesting insights into the Truman presidency and post-WW II cold war era, and the house rates as one of Key West’s must-see museums.