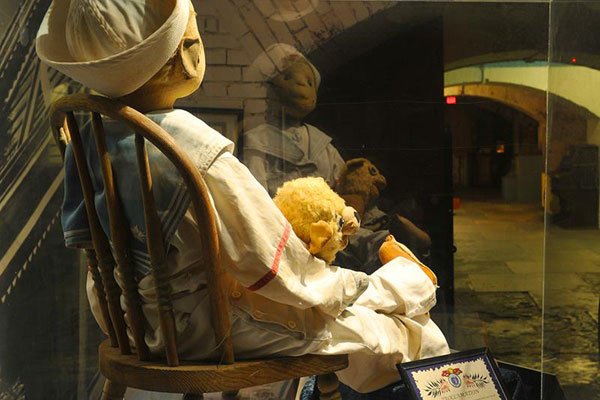 It all started when Robert Otto was 4 years old and living in a home in Key West that now serves as The Artist House Hotel. The year was 1904 and a young girl believed to be of Bahamian descent gives him a life-sized doll made of fabric stuffed with straw.

The story goes that Otto became enamored with the doll and named it after himself – Robert. Otto built the doll its own room in the attic complete with furniture, and toys, including the dolls, own teddy bear. As Otto grew, he started blaming Robert for any mishaps that Otto himself had committed. Eventually, the doll took the blame for everything that was negative in Otto’s life.

When Eugene returned to the house with his bride Anne he often escaped to the turret room where the light was better for painting. Ever present was his doll Robert.

Robert spent his days propped up against the southwest window of the turret room. School children walking by the house would look up and report seeing Robert move from one side of the window to the other. Other visitors to the house would describe how the doll’s facial expression changed according to the conversation in the room. Reports of Robert moving from one side of the room to another and the sound of giggling in the room were made.

Anne loathed the doll and after her husband’s death she demanded that the doll stay in the attic in a cedar chest. Many years after her death the doll was found and donated to the Key West Art and Historical society. Robert is now on display at the East Martello Museum, along with his teddy bear.

The world famous  is the most photographed house in Key West and the former home of Robert the Doll. The Artist House has been operating since 1978.