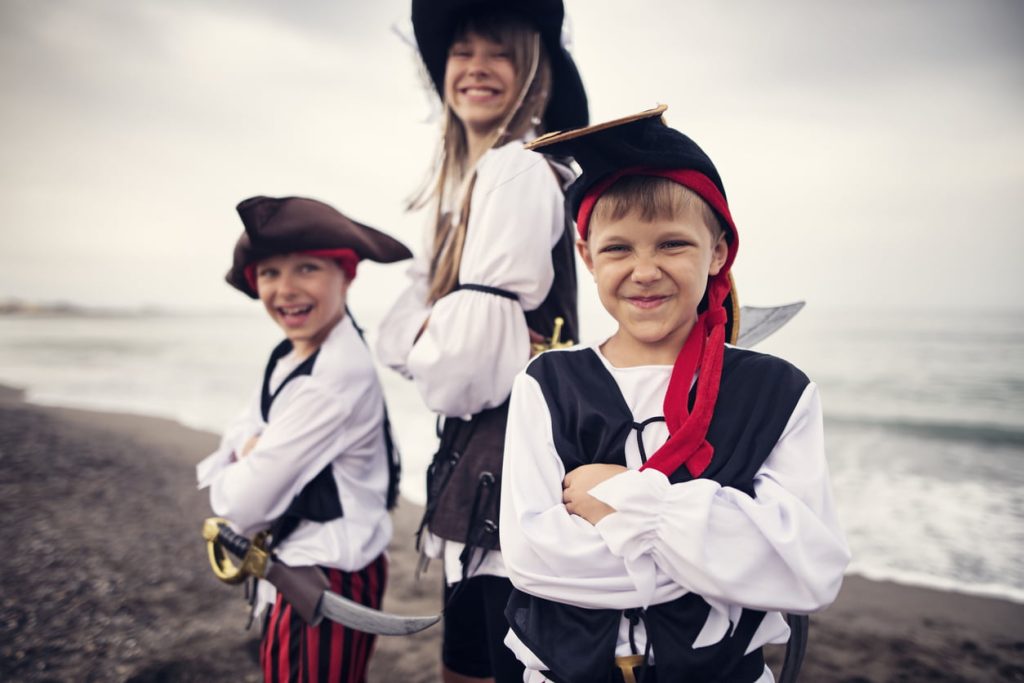 The blue Caribbean waters, coral atolls, mangrove-shrouded inlets, and remote anchorages that make up the marinescape surrounding Key West have always attracted explorers, escape artists, and pirates of various stripes. From the notorious Edward Teach, also known as Blackbeard, to Captain William Kidd, Black Caesar, and Jean La Fitte, on to the rum runners of the prohibition era, to the cocaine and ganja smugglers of more recent vintage, Key West has always hosted its share of renegades. Hark to the tales of the formation of the Conch Republic, join the revelry of Fantasy Fest, or simply go out for some late night partying in town and you will easily recognize that the devil-may-care, free-booting pirate spirit still haunts the island. If you are one of those who feel a stirring of their pirate souls when they hit the dock in Key West, you will be happy to know that the island offers a way to seriously get your pirate on. This is the event every scurvy dog and winsome wench will want to hit: the annual Fort Taylor Pyrate Invasion.

This rip-roaring clash between bands of salty seadogs and the Redcoat defenders of the fort happens annually in the first week of December at Zachary Taylor Historic State Park. While not perfectly historically accurate (The Golden Age of Piracy ended around 1725, while the construction of Fort Taylor began in 1845.), the Pyrate Invasion is certainly a perfectly good time for freebooters and marauders young and old. As part of the larger Key West Pirates in Paradise gathering, the Invasion brings serious pirate history buffs, historical re-enactors, and a big crowd of costumed fun lovers to the grounds of the beautiful Fort for 3 days of piratical fun.

Exhibits, encampments, living history demonstrations, wandering minstrels, live battles, crafts people selling their wares, and activities for young crew members make this event everything a would-be brigand could want. Learn the history of the pirate life in the Keys from the early days of the French buccaneers to the Wreckers of the 19th century. Dedicated enthusiasts will be on hand to answer questions and demonstrate many aspects of the pirate lifestyle including shipboard life and sailing, cooking, navigation, medicine, and of course pirate weapons like the cutlass and rapier, Queen Anne pistol, British musket, and roaring cannon. The action will get real when tall ships like the 74′ topsail schooner WOLF roll up offshore with guns blazing in support of the invading pirate crews as they take on the British defenders of Fort Taylor. Whether you want to practice your sea shanties and dig for treasure on shore, join the crew on one of the attacking vessels, or participate in battles at sea, the Fort Taylor Pyrate Invasion will have you ready to join up with a crew of hearty scalawags and sail away under the Jolly Roger.

For a full dose of black-hearted good times, make port in Key West on Thursday afternoon and show up for the Pyrates of the Coast National Walk the Plank Championships held aboard the schooner WOLF. Enjoy a kids’ pirate costume contest and watch the miserable captives plead for their lives before the merciless pirates force them to plunge into the sea. Later, hungry landlubbers and pirates alike can join their shipmates in Mallory Square for the Caribbean Pirates Feast, a royal spread that includes a buffet of traditional Cuban roast pork with all the trimmings and plenty of Key Lime pie and other goodies to finish things off.

The festivities will continue after dinner Thursday with a competition for the Most Buxom Wench and Bad Ass Pirate on the crew. On Friday, after the skirmishes die down, the pirates make peace and come ashore to party at the Buccaneer Ball put on at the historic East Martello tower by the Friends of Fort Taylor and the Key West Art & Historical Society. The grog will be flowing at this 21 and over event, and it will be a perfect chance to check your cutlass at the door and clank mugs the way the lads and wenches used to do in old Port Royal.

Arrgh, matey! If you be a pirate for true, then point yer bowsprit fer ol’ Key West in early December for the Pyrate Invasion. There be plenty o’ good times fer all of ye modern day pirates of the Florida Keys. And be sure to set yer compass by Cool Key West to get sure bearings on the coolest tours and activities in town.