Pirates of the Florida Keys – The Spanish Treasure Fleets 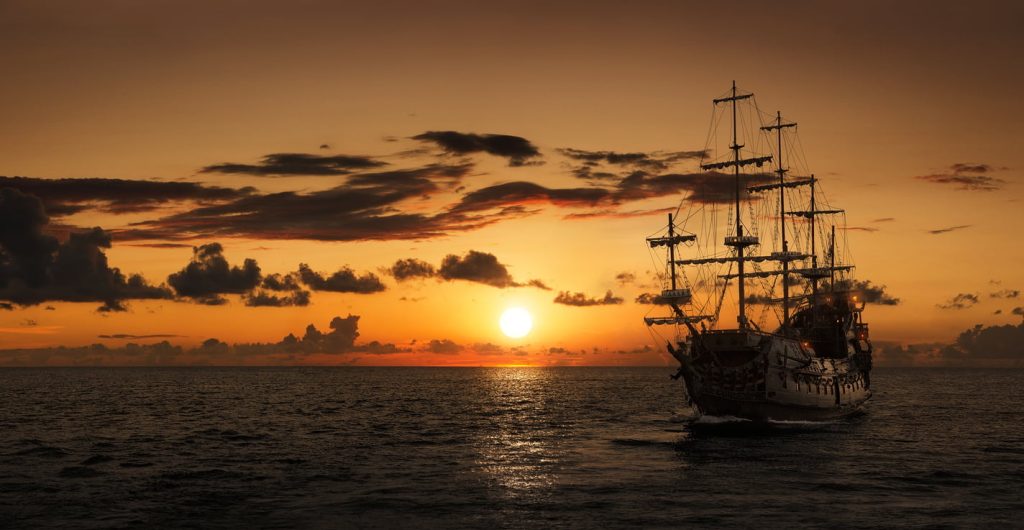 Throughout its history, Key West and the Keys in general have held a bit of the frontier, outlaw mystique. Adventurers, castaways, smugglers, runaways, and renegade souls of various stripes have always been and still are attracted to the area. And a significant part of Keys’ regional lore is the many tales of the exploits of the pirates of the Florida Keys and the Caribbean waters beyond. Back in the days of sail, the Florida Keys and the Atlantic coast of Florida held a natural attraction to those seafarers engaged in the maritime industry of piracy. This was due in large part to the fact that, beginning shortly after the arrival of Christopher Columbus in the New World in 1492, the waters of the Gulf Stream through the Florida straits and along the coast became the primary shipping lanes for the Spanish treasure fleets that supplied most of the world’s precious metals. By 1537, treasure ships protected by heavily armed warships were making yearly runs between Seville, in the south of Spain, and Mexico, Central America, and South America via the Caribbean. These highly-organized and well-guarded treasure fleets were called flotas, and the Spanish monarchy came to rely on the income realized from a 20% royal tax collected on all the cargo carried by them to and from the New World and Spain.

Of the five fleets of the flota system, two operated in the Pacific. One ferried Chinese goods from Manila in the Philippines to Acapulco, Mexico for overland transport to Vera Cruz. The other brought Peruvian silver up the west coast of South America to Panama, where it was loaded on mule trains and carried to Porto Bello on the Caribbean side of the isthmus. The remaining three fleets sailed between Spain and the Caribbean, transporting troops, settlers, and manufactured goods out to Spanish colonies and loading treasure for the return trip back to Spain.

The flotas would split into three groups upon arrival in the Caribbean. The Tierra Firme fleet sailed for Porto Bello, where the ships would load Peruvian silver, then head for Ecuador to take on gold at the port of Cartagena. Finally, the fleet would stop in Columbia for emeralds and Venezuela for pearls. A second group, the New Spain fleet, would go north to Vera Cruz to load Mexican gold and silver, as well as the porcelain, silks, and spices sent from China via the Philippines. The third fleet, called the Honduras fleet, would head for Trujillo for cargos of indigo dye, a rare and expensive cargo from which the purple colors associated with royalty were derived. Once loaded, the three fleets would reunite, using Havana, Cuba as a staging area from which to launch the voyage back to Spain. The treasure fleet, called the Plate fleet, would sail out into the Yucatan channel, where the prevailing winds and the Gulf Stream would take it along the south Florida coastline and out into the Atlantic for the trip across to Europe.

Routes of the Spanish Treasure Fleets

Loaded as they were with precious metals, gemstones and pearls, spices, silk, sugar, tobacco, and many other luxurious and exotic items, the big treasure galleons were some of the richest prey available to privateers and pirates alike. And the hunting grounds were very friendly to the pirates in their smaller, swifter vessels. The waters of the southern Gulf of Mexico and Caribbean along the Florida Straits can be treacherous. The area is plagued by tropical storms and hurricanes. It is also laced with a labyrinth of reefs, shoals, and islets, and is close to many hidden anchorages and land-based wilderness hideouts. These factors meant that the near-shore sea lanes off the Dry Tortugas, the Marquesas, the Keys, and the southern Florida mainland, as well as the waters around the Bahamas, Hispaniola, Jamaica, and other Caribbean islands provided an ideal operational setting for pirate captains.

The Jolly Roger flag used by Edward England and other pirates.

The pirates could launch raids on Spanish shipping that was moving relatively close to shore, then run for the safety of hidden moorages and land bases protected by in-shore waters that were very hazardous to large ships captained by men who were not intimately familiar with the area. Large numbers of heavily-laden ships traveling through hurricane-prone seas also offered many opportunities to engage in wrecking – the plundering of grounded and sinking ships. Often, loaded treasure fleets would be decimated by a hurricane, with multiple ships lost to the reefs, run aground, or sunk in shallow water. Other times, a storm would scatter the fleets, leaving stragglers separated from the convoys to become easy pickings.

The Spanish treasure fleets plied the Caribbean for more than 200 years, and fortunes were made, stolen, and lost many times over. Spain enjoyed a time in the sun as the richest and most powerful nation on earth. As its New World colonies flourished, the busy trade and treasure routes of the Spanish Main gave birth to legends of the pirates of the Florida Keys that still echo in Key West today.