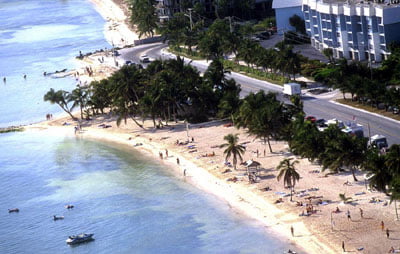 Many visitors arrive in Key West with one question uppermost in their minds: Which way to the Key West beaches? Key West is a semi-tropical island surrounded by crystal blue waters and bathed in sunshine. Palm trees sway in the breeze and tropical flowers bloom exuberantly. First-time visitors and others who are unfamiliar with the Florida Keys naturally assume that the Key West shoreline must be comprised of expansive stretches of perfect sand. However, this not the case, because sand is a relative rarity on Key West. In fact, most of the beach sand on the island is hauled in by the private resort operators and periodically replaced after it is washed away by tropical storms. But fear not beach lovers – beyond the private beaches at resorts, beach bums in the know easily secure all the high-quality sand, sea, and sun they want once they learn the ins and outs of the Key West public beaches that lie scattered like gems along the Atlantic shore of the island.

For the first lesson, let’s take time for a basic primer on Florida’s beaches in general and Key West beaches in particular. A quick glance at a map of the USA shows that mainland Florida is a low-lying peninsula with a general north/south orientation, exposed to the Atlantic Ocean on the eastern shoreline and the Gulf of Mexico on the western side. The Florida peninsula was formed beneath the waters of ancient seas as a limestone plateau that was laid down over the tectonic plate bedrock formation known as the Florida Platform. In more recent eras, as global sea levels rose and fell with the ice ages, the limestone plateau was exposed, weathered, and covered with the sandy soils of sea bottoms and beaches. The wide, mostly savannah landform that is modern Florida appeared during the end of the last glacial period, about 15,000 years ago.

The Florida Platform as compared with the modern Florida Peninsula, with water depths.

It is this geologic history and ongoing coastal exposure to the effects of wave and tidal action that has left mainland Florida with 663 miles of sandy beach, nearly half of the state’s more than 1,260 miles of coastline. In contrast, the Florida Keys share a past that is quite different from that of the mainland. The islands of the Florida Keys are remnants of ancient coral patch reefs that were underwater during the warming period between two ice ages, about 125,000 to 75,000 years ago. During this period, called the Sangamonian Stage, melting glaciers raised sea levels approximately 25 feet above their current height, and a shallow sea covered southern Florida.

While the Florida Plateau was underwater during this period, several parallel lines of reef formed along the southern reaches of its Atlantic edge. They extended in a curving line south and then west from the present Miami area to what are now the Dry Tortugas. When the next ice age arrived with the Wisconsin glaciation (approximately 85,000 to 11,000 years ago), water was pulled into the glaciers and the sea level dropped to about 350 feet lower than it is today. The reefs were left exposed above water, where the coral eroded and formed into the layers of limestone that now make up the bedrock underlying the southern portion of Florida and the lower Keys.

As water levels slowly receded, new reefs formed further offshore, resulting in the bands of coral that make up the Florida Reef. Lying about 6 miles off the Keys along the edge of the straits between Florida and Cuba, it is a barrier reef that places the Keys in protected waters. This is why the islands of the Keys have not been exposed to the wave action that breaks down coral and rock into sand and distributes it along the shore as beaches.

If you enjoy geology or simply like to know the why of things, you might have liked this rather detailed excuse for the general lack of large, high-quality beaches along the Keys. Others can save a copy of this post on their phones and have some impressive happy hour conversation material regarding Key West beaches. And beach lovers searching Key West for a patch of white sand to call their own have come to the right place. Key West stands out from the rest of the Keys by having a number of good beaches, including natural and man-made, public and private. This is the first in a series of occasional articles that will give readers complete inside information on the six Key West public beaches: Fort Zachary Taylor State Park, Smathers Beach, Higgs Beach, South Beach, C.B. Harvey Memorial Rest Beach Park, and Dog Beach.

While they may be unable to compete in size and post-card perfection with the strands found up north, the Key West public beaches can boast some nice stretches of sand and plenty of room to have a great time. They are also really safe for kids and non-swimmers, very convenient to any point in the city, and feature winter temperatures that average just below 80 degrees F., all things the beaches up north cannot necessarily claim. Most Key West public beaches offer good to excellent conditions for sunbathing, swimming and snorkeling, and several have piers where fishing is allowed. With the exception of Fort Zachary Taylor State Park, which has a small entry fee, these public beaches are free and available for anyone to use from dawn until late night. They are excellent places to have a good time, but you should be aware of a few general guidelines. There are no lifeguards present, and topless and nude bathing are illegal, as are open alcohol containers. As with any shoreline, the sand and water environments at the public beaches will vary with the seasons, water conditions, and time of day. Also, these are urban beaches, not deserted atolls in the Maldives, so expect to see other people, vehicle traffic, and nearby development. Still, everyone can find somewhere and something to love about one or more of these beautiful beaches. At Cool Key West, we want to set you on your way to doing just that. Read all the posts, then reward yourself with your favorite tropical beverage because you will have become an expert when it comes to planning some great Key West beach time.